Family, Friends and Country: Mme. Binh In Her Own Words 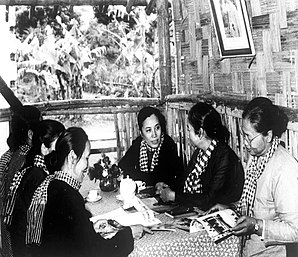 For fourteen years, between 1962-1976, I was active in foreign relations for the National Liberation Front and the Provisional Revolutionary Government of South Việt Nam. As I look across my life, those years comprise the period most worthy of note, for they cover some of our country’s major events, which I witnessed and in which I had the very good fortune to participate.

… In addition to taking part in the Paris Peace Conference, my other primary work was mobilizing international support for our resistance…

We can say that voices from everywhere–from large cities to remote villages, including even those close to the North Pole–announced “solidarity with Việt Nam.” Everyone agrees today that the international solidarity movement with Việt Nam, which formed in opposition to the American War of Aggression, …was extremely important in contributing to Việt Nam’s victory.

One of our key objectives was to gather the support of antiwar and peace groups in the United States. The first time I met representatives of the American antiwar movement was at a two-day conference held in Bratislava … in 1967… I was not impressed with these Americans at first sight. They were not dressed tidily, and their way of speaking seemed overly casual.

Yet when I described the situation in Việt Nam, the American participants listened attentively and asked many questions. I spoke especially about the war in the South, including the American military’s crimes, and I expressed our people’s aspirations for peace and independence. … By the end, we were … holding hands, … promising to alert the public, especially in the US, … [to] the reality of what was happening in Việt Nam. We asserted that, together, we would strengthen our solidarity to end the war, a war the American public had never wanted.

Of course, I could not visit the United States during the war years, but I did meet Americans at gatherings organized by US groups opposed to the war. Many US delegations came to Paris to visit us. … They made a beautiful impression on us, particularly the American women, who wanted the war to end and to have peace so their husbands and sons could avoid the draft and an early death. …

… Many American friends could not hold back their tears when they heard descriptions of the suffering of Vietnamese women and children. These meetings were held mainly at the initiative of Women Strike for Peace. After 1975, I met again old friends, such as Cora Weiss and Mary Clark from the United States. … I can never forget them, because they spent a precious part of their lives fighting bravely for Việt Nam.

There were many demonstrations, often with women as the majority of the participants. A photograph from a demonstration in Miami, Florida in 1972 contains a detail particularly moving to me. One of the sisters is wearing a T-shirt with an image of Mme. Bình and the slogan, “LIVE LIKE HER.” I’ve recently learned that many women wore “Mme. Bình T-shirts” at demonstrations across the US. … Those American women were truly courageous!

These international friends … live according to political and humane ideals; their happiness comes from following those ideals. … One person I want to emphasize … is the late Dave Dellinger, … one of the first Americans to visit North Việt Nam and also someone who held firmly to his positions on peace and justice.

Mme. Binh goes on in her memoir to list by name her special friends, … including Cora Weiss, Tom Hayden, Rennie Davis, and John McAuliff.

Up until now… US officials, particularly in the military… believed that, had the Americans “plunged headlong” by using their full military strength, the United States probably would have “achieved victory.” These are the shallow and blind views of those who saw apparent facts but not the essence of the issue. They saw the temporal unfold before their eyes, but they did not see the whole. Therefore, they could neither perceive nor foresee the underlying, inevitable, and ultimate conclusion.

Suppose Việt Nam had not enjoyed an international solidarity movement, particularly in the US. If so, we could not have shaken Washington’s aggressive will… The US administrations had to address the widespread public opinion opposing the meaningless war they had created in Việt Nam. The US anti-war movement … drew from many forces–communists, leftists, progressive people, those who simply love peace and justice, and others. This political and material strength shook the most stubborn, conservative, and warlike minds in the US political leadership.

The Vietnamese people have great appreciation for the peace and anti-war movements in the US and view those movements’ contributions as important in shortening the war and re-establishing peace in Việt Nam. Not long ago, an American film team visiting Việt Nam asked me, “Is it true that Việt Nam profited from the divisions within the United States?”

“No,” I answered. “We don’t think that way. The work that we did took advantage of the American people’s spirit, which prizes peace and justice, to oppose again and again the useless and destructive war in Việt Nam, which provided no benefit for the American people.”

It is fortunate that many Americans, particularly the women, understood this point and stood on the side of common sense and peace. That made possible the base leading to later reconciliation between the people of our two nations.