Judy Clavir Albert, known as Judy Gumbo, (b. June 25, 1943 in Toronto, Canada) is a Canadian-American activist. She was an original member of the Yippies, the Youth International Party, a 1960s counter culture and satirical anti-war group, along with fellow radicals Anita and Abbie Hoffman, Nancy Kurshan and Jerry Rubin, and husband Stew Albert Judy received her nickname, “Gumbo,” from Black Panther Party leader Eldridge Cleaver. Cleaver first referred to her as “Mrs. Stew,” finding her refusal to use her husband’s surname unacceptable. When Judy objected, Cleaver nicknamed her Gumbo, because “Gumbo goes with Stew.” 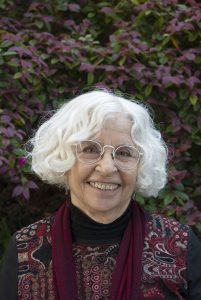 Gumbo arrived in Berkeley in the fall of 1967, and became involved with the activist community. She worked at the 60’s underground newspaper, the Berkeley Barb and helped found the offshoot Berkeley Tribe. In Spring of 1968 she joined the Yippies in Chicago to run a Pig named Pigasus for President at the protests during the Democratic National Convention. When she wrote a feminist piece for the Barb’s publisher Max Scherr, he made his feelings about women’s liberation clear when he titled it with a double entendre, “Why the Women are Revolting.” She helped stage the People’s Park protests in Berkeley after Stew wrote the Barb article that initiated those protests. She continued to advocate for women’s rights through W.I.T.C.H. (Women’s International Terrorist Conspiracy from Hell), a Yippie guerilla theater feminist group.

Gumbo was put under surveillance by the federal authorities. In 1972, the FBI described her as “the most vicious, the most anti-American, the most anti-establishment, and the most dangerous to the internal security of the United States.” In 1975, she discovered that a tracking device had been placed on her car. Her home was broken into and a listening device was installed. It was active for 8 days. As a result, she was part of a lawsuit that successfully challenged warrantless wiretapping.

In 1970, while the war in Vietnam still raged, Judy and two other Yippie women visited the former North Vietnam. In 2013, Judy returned to a unified Vietnam to help celebrate the 40th anniversary of the Paris Peace Accords.

What is Yippie Girl about?

It tells the story of Judy’s journey of discovery through radical politics and social protest. How she challenged sexism and herself, exposed illegal government surveillance, and found love, companionship, and purpose.

What is a Yippie?
A radical, global movement, a yippie uses theater to lay bare what it means to be oppressed. As detailed in the book, the Yippies ran a pig for president to protest political corruption and levitated the Pentagon to protest the Vietnam War.
Did Judy really have an FBI file?
Yes, Judy and her partner Stew were actively surveilled by the federal government for years. The file totaled over 8 pounds. At one point, the FBI described Judy as “Considered to be the most vicious, most anti-American, most anti-establishment, and most dangerous to the internal security of the United States.” Take a look at Judy’s FBI file!
Was Judy a character in The Trial of the Chicago 7 movie?

The Aaron Sorkin movie “The Trial of the Chicago 7” doesn’t give too much thought to the role women played in the protest. In Yippie Girl, you learn Judy was originally appointed office manager for the trial team. But because no one would listen to a woman, she ended up answering phones and taking messages … just like the one female character in the movie.

BTW, Judy prefers to refer to the defendants as the Chicago 8 because that’s what it was until Bobby Seale’s case got severed.

Was Judy charged in that trial?
Judy’s partner, Stew, was an unindicted co-conspirator. In the book you learn their role in organizing the protests at the 1968 Democratic Convention and even how others were accused of being responsible for Judy’s protest activities. Judy was never charged.
Is Gumbo Judy’s real last name?
The book tells Judy’s story as she finds herself and chooses how to be identified, including accepting the name “Gumbo” given to her by Black Panther Party leader Eldridge Cleaver. Hint: Judy was dating her partner Stew at the time and gumbo is a type of stew.
Is this an all-ages book?
Well, it was the 60’s and 70’s….The book contains references to sexual relations, drug use, and criminal activity. It also contains uplifting messages about the ability of youth to transform the world around them. Parental caution is advised.
Wanna know more?

You’ll find more to read, more photos and Judy’s complete FBI files among the multiple items in her voluminous archive at www.judygumbo.com It’s free – check it out!